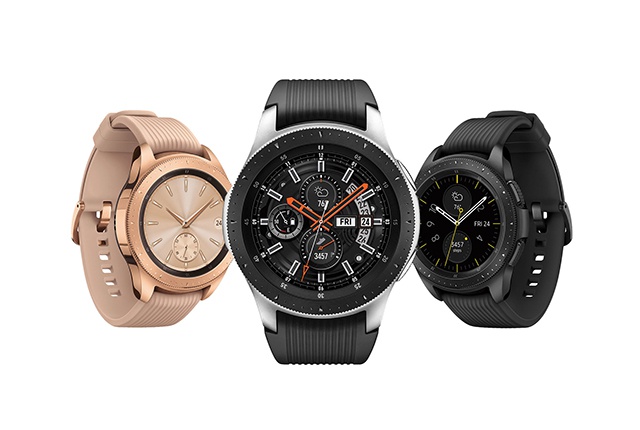 Korean tech giant Samsung hosted its Unpacked event in New York yesterday to announce the Galaxy Note 9 phablet. With that, the company also launched the Galaxy Watch, the fourth device in the companyâ€™s line of wearable devices.

Successor of the Gear S3, the all new Galaxy Watch is the first smartwatch from the company to ditch the Gear branding. Reports had earlier suggested that Samsung will be using Googleâ€™s Wear OS instead of Tizen, which was said to be the reason for dropping the Gear branding. However, Samsung is yet again relying on Tizen Wearable OS 4.0 on the Galaxy Watch.

It will be coming in two size variants -42mm and 46mm, with different display sizes, battery and color options. Both feature a circular Super AMOLED always-on display with the 42mm variant having a 1.2-inch panel and the 46mm variant featuring a larger 1.3-inch one. The display has a resolution of 360 x 360 pixels and has Corning Gorilla Glass DX+ protection.

The new smartwatch features a new stress management tracker that can detect high levels of stress and suggest breathing exercises to calm down the user. The company has also used a new sleep tracker that can monitor different levels of sleep, including REM (rapid eye movement) cycles.

Samsung has increased the trackable workouts from 18 to 39 by introducing 21 new indoor exercises. Additionally, the device also comes with calorie tracking, personalised alerts for nutrition and nutritional information for meals using Bixby Vision on a paired Galaxy device.

The Galaxy Watch is MIL-STD-810 certified for durability and 5ATM + IP68 certified for water and dust resistance. Users will have more options than they can go through for watch faces as the device already has over 60,000 watch faces to choose from.

In terms of performance, the Galaxy Watch is powered by a dual core Exynos 9110 SoC coupled with 768MB RAM on the standard version and 1.5GB RAM on the LTE version. Both the versions feature 4GB internal storage.