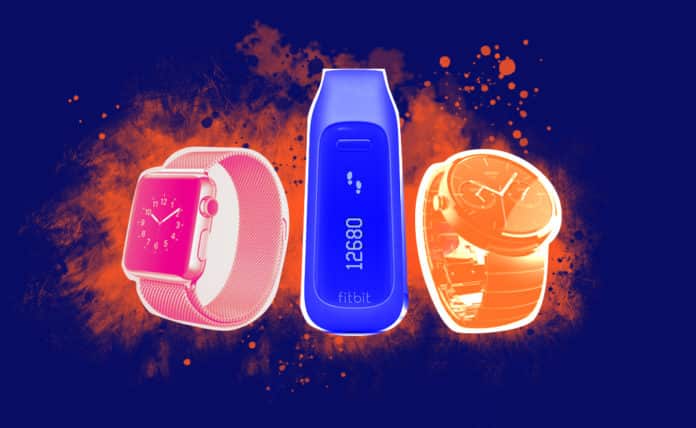 Illustration by Â© IoT For All

The wearable electronics industry has widely expanded over the past few years. The field has been further sub-categorized into general fitness and medical applications. Most people these days are enamored with the various fashionable devices that can be worn around oneâ€™s wrist, ankle, shoulder, etc. For the common person, wearable electronics have definitely re-kindled the understanding of the human anatomy in a much easier manner. Wearable technology today is one of the most pioneering and sophisticated advancements in the technological sector due to advancing sensor and wireless technology.

From a â€śbasic-needsâ€ť perspective, all sensors in a wearable device are expected to be biocompatible so the device can safely function on the body to gather important information. Also, these sensors vary from device to device. As many wearable products fall through the hype curve as the market competition grows, companies constantly consolidate around various aspects of wearable products that make a difference in its value. One such value add in these devices comes through sensors. So, what are the sensors embedded in these devices that allow such efficient and useful analysis?

Some of the popular sensors that are widely used in fitness trackers and medical devices are listed below.

Gyroscope and Accelerometer: The gyroscope is used to measure angular velocity and can be used for navigation purposes, as it detects orientation and rotation. Another commonly used motion detecting sensor is the accelerometer, which tracks the basic human movements in all directions, such as tilt, inclination and the overall orientation of the body. A gyroscope is often paired with an accelerometer to give a 3D representation of a workout movement. Most fitness trackers on the market use this combination to get a strong grip on 3D workout motions.

Wearable Electrodes: The electric pulses in the electrodes read the heart rate in a person, so the electrodes are made to stick directly onto the skin. Electrodes in medical wearable devices are quite popular among doctors to measure EMG, EEG and EKG on a specific part of the body. As an advancement, such electrodes are now integrated into wearable clothing such that it can be washed without the sensors being removed. An optical heart rate sensor is an advanced version of the wearable electrodes used in healthcare. The sensor typically consists of a photodiode and LEDs both on one side of the system. Itâ€™s a known fact that our bodies constantly emit biophotons. The photodiodes in the sensor captures the light that is present in the blood. Hence, the photodiode signal reads the instantaneous heartbeat of a person.

Temperature Sensor: As the name suggests, this sensor keeps track of the body temperature; the more the body seems to heat up, the more intense a workout is detected by a fitness tracker with this sensor.

Proximity Sensor: As the name suggests, a proximity sensor detects whether a defined subject is present nearby. The defined subject varies from an actual human to non-living objects or even walls. However, when selecting a proximity sensor, itâ€™s worthwhile to understand what the desired range would be to detect a distance or even the beam width to monitor the distance. A wearable proximity sensor is very useful in devices with applications related to obstacle detection, detection of certain metal objects in an industrial set-up, etc.

Biochemical Sensors:Â This sensor in a wearable device can convert a chemical component in contact to an electric signal. Biochemical sensors work on the mechanism of chemiresistive detection in a wearable configuration. The electrochemical sensor configuration performs continuous monitoring of EtG (ethyl glucuronide) from a personâ€™s sweat to help keep a track of their metabolic rate. Such sensors have also been widely used in wearable devices to track oneâ€™s alcohol consumption and overall lifestyle.

Typically, the success of a wearable device is dependent on the integration of sensors with algorithms into wearable form factors that allow doctors, patients and generally everyone looking for a fitter life to focus more on prevention of chronic diseases. Today, because of these devices, we have access to continuous collected data rather than periodic measurements of health-related signs. One can only imagine the diverse advancement thatâ€™s yet to be seen in the realm of digital health, as the R&D on this subject continues to develop.