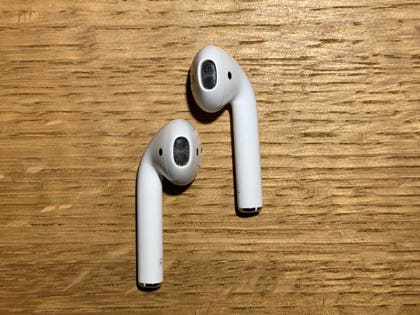 This week in wearable news, a new rumor suggests AirPods are now so close you can almost touch them, Garmin‚Äôs $2,500 smartwatch draws attention, Fitbit‚Äôs latest is reviewed and there are more stories of the Apple Watch potentially saving lives.

The Week in Wearables is a news digest, out midweek, focused on some of the things that have happened in the world of tech you can wear on your wrist, perch on your head, stick in your ear, sling around your waist, tuck into the small of your back or, well, you get the idea.

Well, it‚Äôs not like we haven‚Äôt been waiting for the next AirPods, right? It looks like they‚Äôre nearly here.

But today comes a new¬†report from Digitimes, picked up¬†by 9to5Mac, which hints that we are very nearly there.

I don‚Äôt agree with everything Digitimes is predicting but it‚Äôs encouraging stuff none the less. It says that two companies are gearing up for mass production of next-gen iPads and AirPods.

Where I‚Äôm not in agreement is the suggestion that the¬†now-confirmed Apple event for Monday, March 25¬†will be the springboard that launches these products. My belief is that the event will be services-dedicated but that it may comment on the hardware, likely to be announced without an event, a little before.

Of course, Apple is likely to mention that the products are coming but the event itself looks like being laser-focused on services.

9to5Mac figures it could be that the products will be announced by press release as early as next week, which I think is possible. Though I also think onsale date will absotively, posilutely be after the March 25 event.

Of course, $2,500 isn‚Äôt actually the most you can pay for a smartwatch. But it‚Äôs up there. Brian Heater from TechCrunch reports.

Somewhere out there is a person willing to pay $2,500 for a smartwatch. Surprisingly, that individual has several high-end options from which to choose. And while the Garmin name doesn‚Äôt exactly scream luxury, the company does know how to build a solid smartwatch ‚ÄĒ and these look pretty decent, to boot.¬†

Maybe not $2,500 decent, but decent nonetheless.¬†

The¬†Marq GPS line¬†puts the company in relatively rare air, with devices starting at $1,500. Asking people to spend luxury watch prices on a smartwatch is a pretty heavy lift, of course. At well over three times the cost of an Apple Watch, you‚Äôre going to want the thing to last for‚Ä¶well, a long time.

The newly announced Fitbit Inspire HR has already been reviewed, over at Wareable.

The Fitbit Inspire HR is an important¬†fitness tracker¬†in Fitbit's timeline. It replaces the company's hugely popular Alta and Alta HR bands as it's most accessible fitness trackers ‚Äď but because it offers a clip-on design, it finally kills off the Flex, Zip and One.

It also feels like a move to stem the tide of Chinese tech companies like Xiaomi and brands like Amazfit who've started to infringe of Fitbit's territory with their own affordable, feature-packed trackers.

Fitbit's riposte isn't simply to cram in every feature under the sun, but to make its tracker better value for money while sticking to the formula that has made it a powerhouse in the world of wearables.

Much more at Wareable.

Also at Wareable, Conor Allison makes some shrewd guesses at what the Swatch smartwatch will be like.

Swatch and¬†smartwatches, smartwatches and Swatch. For years now, we've been waiting for the Swiss watchmaker to enter the arena in some capacity, and for years we've been left waiting with empty wrists.

The ballet first began way back in the heady days of 2015, when Swatch CEO Nick Hayek hinted at the company's wearable plans, while calling the Apple Watch¬†“an interesting toy, but not a revolution”. Two years later, Hayek¬†revealed¬†that the company was working on a smartwatch operating system named ‘Swiss OS', set for launch in late 2018.

Excitement ensued, everything went quiet, then a spokesperson for the company told Wareable back in October that it's “still planning to release an operating system” – and that it'd launch no later than early 2019.

With that in mind, an announcement should be just around the corner, so we've rounded up all the tiny seeds of information we have on Swatch's smartwatch debut, and speculated on where the Swiss company may lean.

The heart monitoring capabilities of Apple Watch have been long known, though AFib recognition and ECG features are only available in the U.S. just yet. But the stories of the Watch spotting heart issues grow every day. As reported at 9to5Mac.

First is another story about Apple Watch‚Äôs ECG feature catching a nuanced heartbeat irregularity. Reddit user¬†sean_themighty¬†shared that his Apple Watch recorded a premature ventricular contraction. Sean immediately sent a PDF of the results to his doctor. She told him it was benign, but scheduled a follow-up appointment in person in a few weeks. She also mentioned that she was impressed that the Apple Watch ECG was able to catch the PVC.

Notably, Sean also has a friend who is a nurse who was critical of the¬†Apple Watch ECG¬†when it first launched, thinking it to be ‚Äúworthless.‚ÄĚ After sharing his latest reading with her, he said she was also ‚Äúvery impressed.‚ÄĚ

More on this and other Watch features praised on Reddit, at 9to5Mac.

AirPods 2 May Start Mass Production Now For Imminent Release, Oh, And iPads Too

Next iPad Rumored To Keep Headphone Jack, May Have Brilliant, Surprise New Design